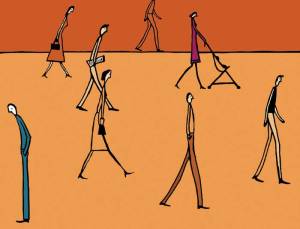 No man is an island…except for Freddy Madagascar.

That was one of my dad’s go to jokes.  I didn’t think much of it when I first heard it, but gave it a good chuckle (still makes me laugh today, actually).  But in looking back at my old life, I could see that the joke was on me – I was that little island and didn’t even know it. I don’t imagine John Donne saw it as a joke.  I had a friend many years ago who was always trying to get me to open up.  You know, the kind of person that would overshare about themselves in hopes that you would take the bait and give a little back.  He would try and ply me with liquor (yeah, that was a tough one) to encourage me to talk about my feelings.  I wouldn’t bite.  Drink, yes, but not bite.  In a moment of frustration, he announced to no one in particular that I was a “spider in a box”.  A lone wolf.  Outcast. In self imposed exile. A recluse.  Hermit.

Ask almost any alcoholic, and she or he will admit to being isolated in one way or another.  I was a secretive, closet drinker.  I drank alone, thank you very much Mr. Thorogood.  And why did I drink alone?  Like many others, it was to avoid the ever increasing concerned looks of friends and family; to avoid the glares of judgement, to alleviate the scrutiny of our own disdain through the mirror of our self-loathing.  I drank alone to box myself in a frail yet powerful mixture of alcohol, self-pity and anger.  I drank alone because people just got in the way of a good thing and I needed more of the medicine to keep me going.  Alcohol was the only way I got through the day.

In terms of comfort, bottles were my supply – people need not apply.

Isolation needn’t be just a physical manifestation of where we are.  Not all alcoholics sit in their basements, drinking homemade beer that has gone off (oops, that was me!) or downing sweet sherry in alleyways, but can be found in barrooms and taverns (the drinker’s den of dens – notice the lack of windows at most old-skool taverns…bless them).  Many drink in lounges, in clubs, at parties, at cottages and other get aways.  Many drink before, during and after vacations with their partners and buddies.  So while many alcoholics may physically be with others, they are still isolated – mentally, emotionally, and spiritually.  We don’t have to be hiding in some dingy cavern, scratching out the days with dirty, cracked fingernails on cold stone, to be isolated.  We hide within ourselves and cast others aside – castaways on our own little island.  We are the Freddy’s of the world.

For this alcoholic, isolating was a way that I could fulfill my self-propelled prophecy of not being wanted.  It was a way of escaping within an escape.  It was like hiding in a sack that was nestled in a vault, hidden under a labyrinth.  When I isolated, I was ensuring that I couldn’t be seen – my very fear and very core issue that I had in my life.  I was playing hide and go seek, except that I didn’t want anyone to seek me, and yet I so craved to be found.  It reminds me of the quote by psychotherapist D.W. Winnicott – “It is a joy to be hidden but a disaster not to be found.”  Except in this case, I had a big part of me not wanting to be found, and then resenting when no one went looking for me.  That is how my sick mind operated.  And then to add alcohol to the mixture fueled the delusion, fear and anger.  Wax on, wax off.  Keep it going, young Daniel. 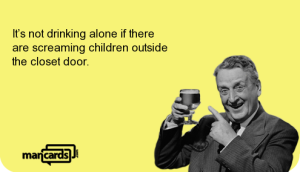 Another aspect of my isolating was the feeling of being better than you.  In separating myself from you, physically, I separated myself from you, holistically.  I was declaring to the world (or really, myself) that I was a much more advanced specimen of the species.  To mix among the plebes, minions and serfs of the planet meant that I was common , and for an alcoholic of my obvious intellectual prowess and superior homo sapiens status, I could not stand for such vapidity and insipidness in my world.  I could not be common because that would mean I was common, and my ego just didn’t handle the throwing of the gauntlets like that very well. I was a man on the go, on the way up, didn’t you know? I had plans to conquer all, including myself.  And to demonstrate that, I would go to my Bat Cave and hatch grand schemes – to make known the injustices of my warped world and to get back at you. And to do that I needed some space, don’t you see?  I needed a place, mentally and in human space, to recreate myself, once again.  I just need room to breathe, and all of you were sucking in my precious air.  Off thee to a nunnery.

And the more I isolated I was, the more difficult it was to get back into the stream of life.  There was something almost comforting about being self-imprisoned.  It seemed the only way to live.  And the natural, hard-wired instinct of connecting with others was at first dampened, then strangled out of me, like a choke hold.  I was able to relate less and less to others, to care less and less of others, and eventually I cared less and less about myself.  My grand schemes were nothing more than tissue paper flitting about over white hot coals.  They vaporized the more I drank at people.  They crumbled as my cocoon cracked and caved in around me, hands still clutching to wet glass, face against cold tile, pain erupting from my very soul.

Isolating, like the alcohol and rage, was killing me.  It was complicit in my deterioration.

Being in the fellowship of AA has been a good thing for me, albeit a difficult one.  I still have a hard time in not isolating.  I still find it difficult to be a part of and not apart from.  I still have my old ways weaved through me at times, and this is one of the big ones for me.  Perhaps there is something about being online that allows me to be a part of, and yet not.  But I know that when I don’t hang with my peeps in the church basements and coffee shops, I feel it.  And I have been feeling it lately.  That old pull of wanting to turn into an acorn and get squirelled away, tough exterior and all, still attracts me at times.  I still get the sirens calling me to hole up and fend for myself.  But I know the danger and the fallacy in that thinking.  It’s the old alcoholic way, and I am no longer interested in that.  So for this old alkie, it’s about doing the action and attaching myself back to the human race.  It’s about not being less than or better than, it’s about being right sized.  It’s about feeling my way through the center of myself through others and their breath, touch and speech.  It’s about erasing the old drive and populating  it with a population of loving and present people. It’s about plugging in. It’s about getting off the island of me and joining the continent of you.

The one thing I have learned in my short time of recovery is that it doesn’t take me long to get back in the slipstream of being with others.  A simple call, a quick meeting, a hand out to someone in need, and bang, I am back in the game.  That’s the insidiousness of this illness and the way it tries to lull us into a complacency that degrades into a bath of self-pity and self – it removes us from where we need to be and puts us in a place of vulnerability.  It’s like a pack of gazelles or other preyed upon animals who travel in large amounts, for safety reasons.  When there is a pride of lions or other prey animals hunting them, the lions aren’t focusing on the core group, where the majority of the gazelle congregate and have strength in numbers.  They are lurking and studying at the outskirts of the group –  looking for the stragglers and isolated beasts.  They are looking for the ones that have set themselves apart from the group.  Those are the ones they pounce upon.  Those are the ones in danger.  And that is how I see myself – I need to be in the middle of the pack, in the middle of AA, in the middle of life period, lest I find myself on the outside looking in, and perhaps looking at a  life mangled by the claws of self-righteousness and ego. In the end, I need to be with you.  When I reach out and you’re there, I thank you.  And when you reach for me, I will be there.